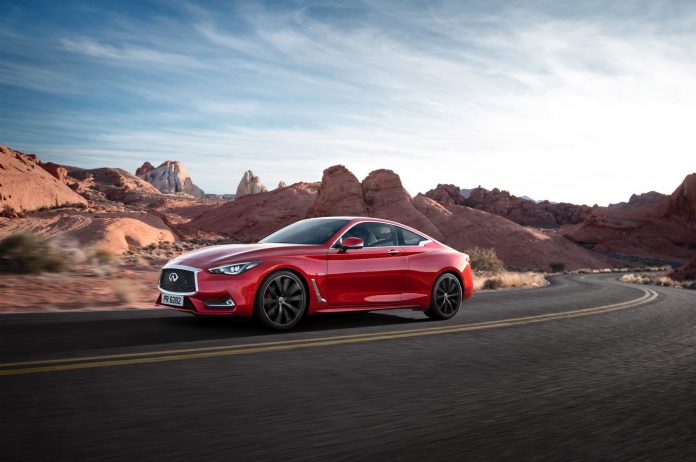 All-new are the Q60 sports coupe, promising a powerful drive from a highly-advanced new V6 twin-turboengine boasting 405 PS, and the QX30 premium active crossover, with its highly-sculpted concept-like exterior, elevated stance and asymmetric cabin design. They will be joined by the refreshed Q50 sports sedan, which features significant performance and dynamic upgrades that deliver a more empowering and rewarding drive experience.

Francois Goupil de Bouille, Infiniti Vice President, Europe, Middle East and Africa commented: “This is an exciting time for Infiniti, as we have transformed our product line-up and established sales records in Europe as we did across the globe. The new models set for their European debuts in Geneva highlight our commitment to expanding our product portfolio in new and thrilling directions, based on daring concept cars. This is the Infiniti way, and one that will help us achieve further success in 2016 and beyond.”

The high performance 3.0-liter V6 twin-turbo engine from the new and exclusive ‘VR’ powertrain familycontinues the brand’s longstanding heritage of advanced six-cylinder powertrains production. The Q60 to be shown in Geneva features the higher-powered 405 PS V6 engine, providing one of the best power-to-efficiency ratings in the sports coupe class.

Alongside the Q60 and QX30, Infiniti will also reveal an upgraded version of the Q50 sports sedan, which has played a key role in the brand’s sustained global growth in recent years. As well as the powerful all-new V6 engine found in the Q60 sports coupe, making its debut in the Q50 is the company’s second-generation Direct Adaptive Steering – comprehensively updated from the ground-breaking first-generation system, and Infiniti’s new Dynamic Digital Suspension, which gives the new sports sedan an optimal blend of ride comfort and class-leading response and agility.

The launch of these new and upgraded models in Europe comes at a time of rapid growth for Infiniti, and in the midst of an intense global product launch period. Infiniti globally sold a record 215,250 new vehicles in 2015, representing a year-on-year rise of 16%. In Western Europe, 7,000 customers bought a new Infiniti last year, an increase of 45% over 2014.