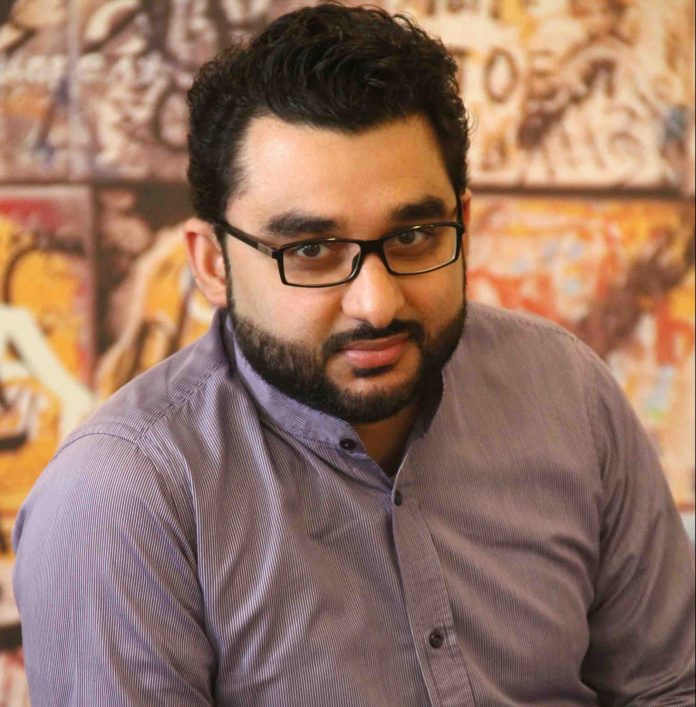 The teenage boy at a private school not getting to play football in “The Game”, the little boy pushing his wheel barrow in “The Central Market”, the teenage girl ashamed to travel in her father’s battered vehicle in “The Pick Up”. Reminders of the little things in life which we take for granted but are only a luxury for many around us. Sending poignant message to society through his award winning short films is renowned Bahraini film maker and co owner of Elements Cine Productions, Mr. Saleh Nass.

Since his first short film ‘The Traveller’, made in his university days in England, Saleh has so far been able to make six short films and is en route to making his first feature film in the coming months.

The minutes we spent chatting up with Saleh showed us different facets of this multitalented personality, as he shared with us his views on the world of movie making and his take on the clichés about the Middle East sent out by Hollywood movies.

“I always knew that I wanted to make a living out of doing films. I wanted to do either narrative films or the ones I am working on. And obviously you need to pay your bills, so you need to work on corporate projects like TV commercials and contents for different people,” says Saleh.

Saleh is the co-founder of Elements, along with his business partner, who is a talented Director of Photography and they work on projects together. Their production house, Elements is their hub to create projects, and thus is a very important aspect for a producer like him.

Saleh and his films have travelled to over 30 film festivals with the most recent one being the Tampere Short Film Festival in Finland with ‘The Central Market’. He says, “It was the first time my movie was getting showcased in Europe. Out of thousands of submissions they choose only a 100 or 200. So getting selected to participate itself is a great honour and acknowledgement of what I do.” Talking about the importance of film festivals, he continues, “Film festivals are a great platform to get exposed to other people’s work, different ways of telling a story and a great platform for cross cultural fertilization of ideas and stories.”

With Hollywood movies increasingly stereotyping the Middle East, we asked Saleh what he thinks of the wrong message about our region portrayed by some films. Saleh states matter-of-factly, “Look… we don’t see things as they are… we see them as what we are. If the Middle East is being portrayed like that in their films, it is the reflection of the way they are seeing us. You just have to make films that counter that and really show what we are. The process has to be consistent and not from just one film maker but from different directors giving the actual image of what our region is about, tackling those topics that don’t create these clichéd images. It is not to insinuate a fight between the film worlds but an alternate way of showing the beautiful society and culture of which we are part of.”

When we quote ‘It all begins with the script’, he smiles and answers, “Yes…a script is the blue print of what the film is going to be. The story itself is all-important. If you have a good story line, no one can blame you for the technology that you might have used.” Speaking of his experience, he continues, “I have seen movies that are so moving, even though they haven’t used the most modern technology. I always try to keep my stories universal. This way I can ensure that anyone around the world can watch and understand the films I make.”

When we pointed out to Saleh about the lack of places to see his films, he said thoughtfully, “There was a time when the cinemas used to run short films before showing the feature films. But now those slots are jam packed with ads. There was a time when short films lived only through film festivals but with the entry of online media like Youtube and Vimeo, the short film industry has resurged”.

Talking about the difference and importance of short films, he continues, “Short films belong to a completely different genre. They are non-commercial, where we can experiment with different styles and help to promote the director as a calling card for new projects. And I don’t believe that being a short film maker makes you any less than commercial film makers.”

Speaking of a film maker’s choice, Saleh says, “It is totally up to a person whether they want to go with a feature film or not. I have known directors who have done more than 50 short films and are content with what they are doing. But because I make a living out of what I am doing, I need to raise the bar and come up with feature films and TV series.”

At present, Saleh has been chosen as a scholar by the Goethe institution in Beirut, where he will stay for about a month and work on his feature film. He has a regional producer on board and they are in the process of finishing off the script. “This is a very crucial stage; if it goes wrong from here, the film will turn out badly. In the months to come we will be working on the feature film and Inshallah, we will be able to produce a good movie watching experience,” he says of his current labour of love.

So what would Saleh Nass say to the novice film maker? Saleh answers, “Before starting to make movies for a living, read and watch as much as you can related to films. Find the directors who inspire you. They could be Japanese, Egyptian, French or German. Different cultures can inspire you in different ways, so try to gather the most you can. Also find the role you want to play in the film fraternity and excel in it”