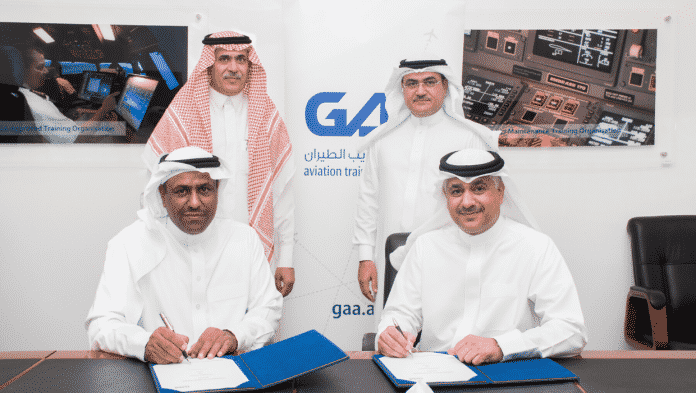 His Excellency the Minister of Transportation and Telecommunications and Gulf Aviation Academy (GAA) Chairman, Eng. Kamal bin Ahmed Mohammed signed a Memorandum of Understanding with Flynas, a low-cost carrier in Saudi Arabia, to provide training services to its Airbus 320 pilots. The signing took place at GAA’s headquarters during HE the Minister’s visit to inspect a newly introduced fourth Airbus A320 Full Flight Simulator (FFS), which will support GAA’s expansion plans and help ease the burden on its existing simulators, currently operating at full capacity to meet local and regional training requirements.

Flynas Chief Operating Officer, Captain Mansour Al Harbi, signed the agreement alongside the Minister in the presence of the Executive Director of Training, Captain Abdul Mohsen Al-Arifi and Training Manager Captain Fahad Al-Yahya. HE the Minister welcomed the partnership agreement, noting that it underlines the quality of the academy’s training services. 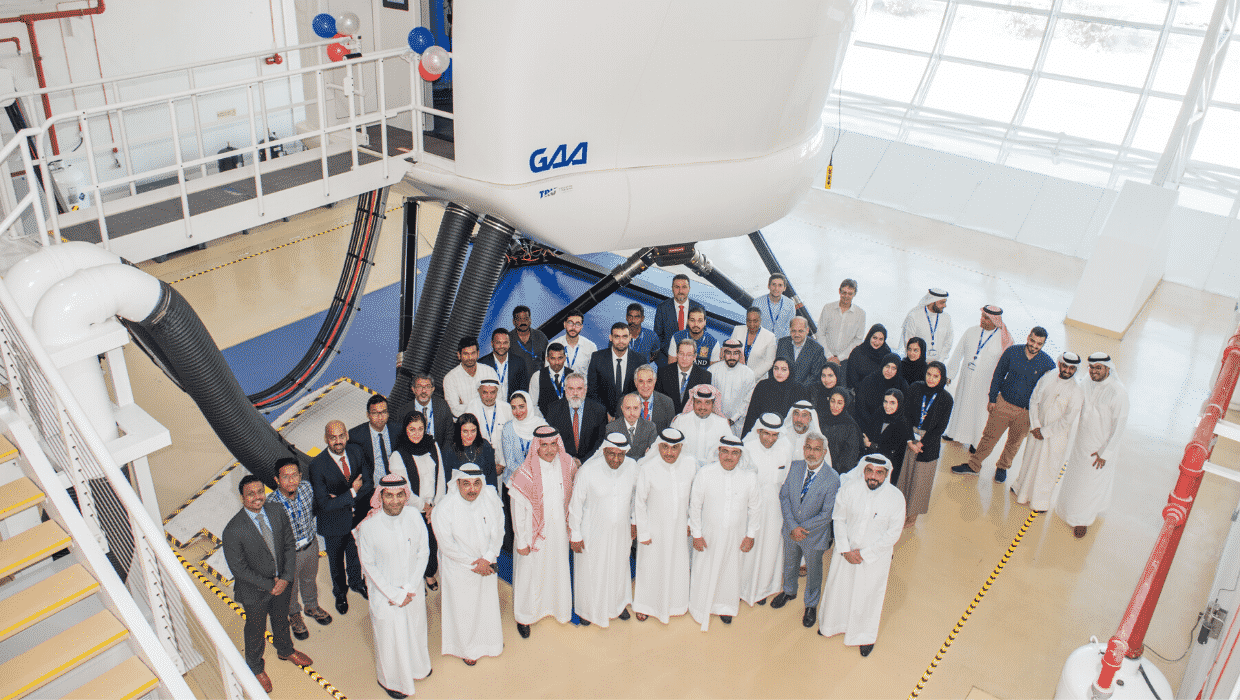 HE the Minister said: “Enhancing the efficiency of specialised training programmes is an important step in the development of the civil aviation sector and is in line with the Kingdom’s Vision 2030 goal to increase non-oil revenues. This is the second FFS the academy has purchased during the 2018-2019 period. The first device has been operating at maximum capacity for the past 18 months, requiring the purchase of another one to support our ambitious regional expansion plan, and our goal to provide competitive aviation training services.”

HE the Minister added: “The academy’s current A320 simulators have been running at 100 per cent capacity for the past three years. This new equipment will enable us to increase the number of aviation training programmes we offer, helping to attract more visitors to the Kingdom. It also brings us closer to realising our objective of providing the best flight training services and tools in the region.”

The new FFS is a core component of GAA’s ongoing expansion, which includes the introduction of new logistics and aviation training programmes that will enhance the academy’s capacity and efficiency, enabling it to meet the growing needs of this important sector. The expansion will also see GAA widen its geographic reach, offering services from Bahrain to a client base extending from the Indian sub-continent to Europe.

GAA Chief Executive Officer Captain Dhaffer Alabbasi, said: “Promoting the Kingdom as a leading aviation training destination is one of GAA’s most important objectives. We have signed an agreement with a major client for the provision of 12,000 training hours, to be executed here in Bahrain over the next two years. The new FFS will account for more than 80 per cent of this usage, with the remaining capacity being used to serve our other regional customers.”

Captain Alabbasi added: “The new Airbus A320 Std. 2.0 NEO & CEO Full Flight Simulator is qualified to Level D by the European Aviation Safety Agency (EASA). It is equipped with a quad-engine option so that it can be configured to various fit-outs as per the client’s actual aircraft.”

GAA, a subsidiary of Gulf Air Group Holding, offers a comprehensive training programme, which includes all the travel arrangements and the associated logistics needed to accommodate the large numbers of international participants.

During 2018, GAA trained 6,522 agents consisting of pilots, cabin crew, engineers, security personnel, and other aviation personnel, 92 per cent of whom were trainees from outside Bahrain. Ninety per cent of all airline bookings GAA made on behalf of participants were through the national carrier, Gulf Air.  With 19,756 hotel nights booked during the year, as well as visas and other expenditures, GAA directly contributed BD1.9 million to the Kingdom’s economy, excluding its own training fees.

As part of its ongoing co-operation and strong bilateral relations, a delegation from the Ministry of Education visited Ebrahim K. Kanoo Managing Director, Mr....
Read more
PR This Week

Batelco, the leading digital solutions provider in the Kingdom has expanded its cloud connect solutions portfolio with the introduction of Google Cloud Interconnect. The...
Read more
PR This Week

For the first time since its establishment, the Bahrain Tourism and Exhibitions Authority (BTEA) is participating in the 26th edition of South Asia's leading...
Read more
PR This Week

The Nationality, Passports and Residence Affairs (NPRA) organised an awareness campaign for expatriate communities. The Labour and Social Development Ministry and the Labour Market...
Read more

Batelco, the leading digital solutions provider in the Kingdom has expanded its cloud connect solutions portfolio with the introduction of Google Cloud Interconnect. The...
Read more
PR This Week

The Representatives Council’s Secretariat-General and the Labour Fund (Tamkeen) signed an agreement. It is to train 40 Bahrainis to work at MPs’ offices temporarily. Secretary-General...
Inside Bahrain

The Lost Paradise of Dilmun (LPOD) water park Bahrain has scooped the 'Brand of the Year' 2019-2020 at the World Branding Awards in London. The...
Sports This Week

Friendship Society for the Blind in Bahrain was established in 1981. Initiated by some blind teachers and students for having a society for the...
Sports This Week

The Nationality, Passports and Residence Affairs (NPRA) organised an awareness campaign for expatriate communities. The Labour and Social Development Ministry and the Labour Market...
Wheels and Gears

As part of its ongoing co-operation and strong bilateral relations, a delegation from the Ministry of Education visited Ebrahim K. Kanoo Managing Director, Mr....
Management Principles

Artificial Intelligence has been the technology story in Bahrain and round the world during 2019 and it doesn’t look like the excitement is going...
Tech

Sony Middle East & Africa has upped its flagship MASTER Series in Bahrain with the launch of the new Z9G 8K LED and A9G...
Entrepreneurial Journey