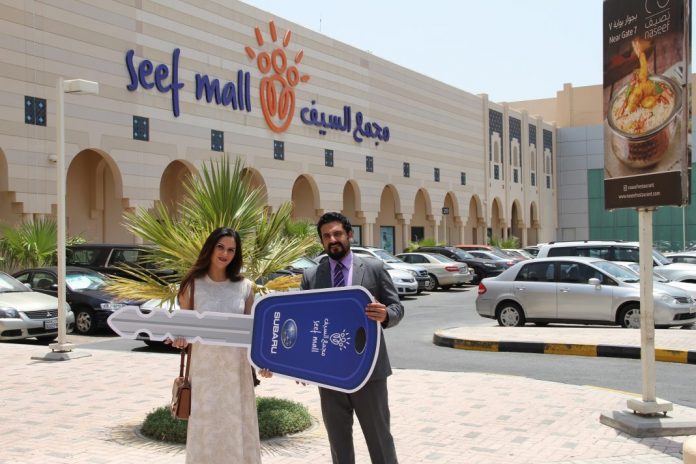 Seef Mall Announces the Winners of the ‘Shop & Win’ Campaign

Seef Mall, the Kingdom’s premier family shopping hub and entertainment destination, announced the winners of its latest ‘Shop & Win’ Campaign which was held from the 27th of May to the 1st of July 2017 where shoppers had a chance to win 3 Subaru XV 2017 cars offered in partnership with Motor City.

Ruqaia Jassim Saqer, Roaya Salman and Noelle Coutts were announced as the winners of the 3 new Subaru XV 2017 cars. The draw took place in the presence of Seef Mall’s management and a representative from the Ministry of Industry, Commerce and Tourism.

The latest campaign, aimed at providing visitors with a unique and fun shopping experience, was held as a part of Seef Mall’s efforts to attract visitors from Bahrain and across the region by hosting various events and activities.

“Since Ramadan is known to be the month of strengthening social and community bonds and fostering relationships, this promotional campaign was launched as part of our initiative to host an event during the holy month of Ramadan and further position Seef Mall as the leading destination for families in Bahrain and the GCC,” said the Chief Executive Officer of Seef Properties, Mr. Ahmed Yusuf.

The ‘Shop & Win’ promotion attracted a large number of shoppers who had the opportunity to enter the raffle draw and win valuable prizes by spending BD20 or more at any of the 3 Seef Malls located in Seef District, Muharraq and Isa Town.

A traditional area was also created in the West Wing of Seef Mall-Seef District as well as Seef Mall Muharraq, as part of the mall’s celebration of the holy month. The area includes a variety of activities suitable for children and ran during the last ten days of Ramadan and Eid Al Fitr.

Seef Mall aims to host a series of events and campaigns throughout the year in order to reenergize and strengthen the retail sector and further position Seef Mall as the leading destination for shopping and entertainment in the Kingdom.

Zain Bahrain, a leading telecommunications operator in the Kingdom of Bahrain, fuelled by the passion to empower Bahraini youth with specific skills, recently announced...
Read more

Volunteering for Humanity: The phase III clinical trials in the...