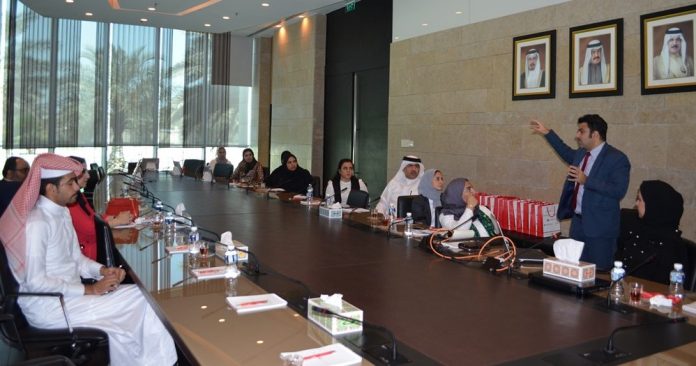 AlQaed: Tawasul is a direct interactive channel that contributes to transparency and justice

The Information & eGovernment Authority (iGA) CE Mr. Mohamed Ali AlQaed stressed that the vision of HRH Prince Salman bin Hamad AlKhalifa – the Crown Prince, Deputy Supreme Commander and First Deputy Prime Minister – to provide permanent and direct communication channels between citizens and government officials in all ministries and governmental entities enhanced the speed and efficiency of public agencies. Additionally, contributed in developing services directed across various sectors for citizens. He also highlighted that the National Suggestions & Complaints System ‘Tawasul’, adopted by His Royal Highness in 2014, is considered as a comprehensive platform that enabled direct interaction via the website on the national portal (Bahrain.bh) and the smart device application which was launched by HRH in May 2016 to provide more features than the website.

During a workshop conducted by iGA in its Muharraq branch with the aim of introducing the system, over 11 participants from government entities (taking part in Tawasul) had attended. The workshop was organized so as to enhance partnership amongst government entities in the field of developing government work to serve citizens in Bahrain.

AlQaed also touched upon the project’s positive results which consisted of many aspects. In the field of developing government work, the suggestions and feedback – received by government service entities via Tawasul – contributed in improving the quality of its services according to the best international practices. Moreover, the system grew beneficiaries and users’ confidence in government institutions which address new high-quality services. Tawasul contributes in achieving the concept of justice and equality between all government service beneficiaries as it accomplishes direct interaction between officials and users of the service. Furthermore, the system contributes in reaching higher levels of excellence and competitiveness between service sectors with the speed of their handling of complaints and response to comments and suggestions – developing radical solutions that comprise simplifying procedures and speed of completion.

The number of government entities that joint the system has increased since its launch by HRH and his directives to all entities of joining Tawasul. Organizations increased from 11 in 2014 to 30 government service entity in 2017. The SLA rate of responding to complaints reached 98% – in comparison with 2014 (61%). Comments were divided into the following – total of complaints included 87%, enquiries 10% and suggestions 3%. The increase of received complaints and suggestions (through the Tawasul app) has reached 28% of the number of cases. This signifies the importance of this channel that is considered as an easy convenient tool to provide suggestions and complaints to public agencies.

The Tawasul system can be benefited from by entering the national portal Bahrain.bh or by downloading the Tawasul app through the eGovernment Apps Store via (Bahrain.bh/apps) on both the Android and Apple platforms. The system has several features that facilitate communication between the citizen and officials; some of which include the ease of submitting suggestions or complaints to government entities with attachments and specify a timeframe for responding to complaints in addition to the ability to follow-up on complaints through an assigned number, accompanied by a questionnaire to obtain the applicant’s view on the response of their complaints.

Private training institutions are set to re-open on September 3, after several months of suspension, as part of the kingdom’s measures to combat the...
Read more
iGA

The Bahrain Handball Association (BHA) organised a webinar which focused on local competitions for the current season. Heads and representatives of member clubs also took...
PR This Week

Named after a rare species of beautiful birds-of-paradise, Cendrawasih, this Balinese dance is a relatively new dance with choreography inspired by classical dance routines....
Management Principles