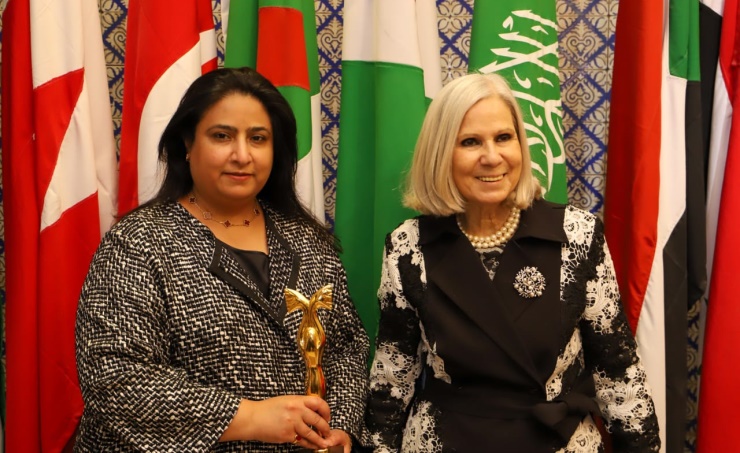 The Undersecretary of the Ministry of Foreign Affairs, Chairperson of the Equal Opportunities Committee and Member of the Supreme Council for Women (SCW), Dr. Shaikha Rana bint Isa Al Khalifa, received the award of “Arab Women and Social Responsibility in an Era of Transformation, Developmental Inclusiveness and Digital Diplomacy”, from the Arab Council for Social Responsibility (ACSR).

The award was granted during the third Arab Women Forum for Social Responsibility, under the title of “Transformation in the Time of Inclusion”, which was held today at the headquarters of the Arab League, under the patronage of Arab League Secretary General, Ahmed Abul Gheit, who presented the award to Dr. Shaikha Rana.

On this occasion, Dr. Shaikha Rana expressed her heartfelt thanks to His Majesty King Hamad bin Isa Al Khalifa, HRH the Crown Prince and Prime Minister, Prince Salman bin Hamad Al Khalifa, and to HRH Princess Sabeeka Bint Ibrahim Al Khalifa, Wife of His Majesty the King and SCW President, for the constant attention and care given to women at all levels, which has made the Kingdom of Bahrain a model for the advancement of women.

The Undersecretary hailed the outstanding role played by the Supreme Council for Women (SCW) since its establishment in 2001, led by Her Royal Highness Princess Sabeeka bint Ibrahim Al Khalifa, lauding the initiatives and programmes of the Council, which serve the interest of women as active partners in development and promote their role in all areas.

She noted the significant results achieved in the field of advancing the role of women in diplomatic work, and the increase in the representation of Bahraini female diplomats in the embassies of the Kingdom of Bahrain abroad and their empowerment to hold more than one position in various diplomatic departments, especially in consulates and organisations.

She added that these achievements confirm the success of the Equal Opportunities Committee in promoting equal opportunities among all employees, taking into account the needs of women in all fields, and promoting the role of women, while noting that the committee will maintain its approach that is based on following up on the needs of women and working to include them within the development and training plans and programmes of the ministry.

The Foreign Ministry Undersecretary expressed her sincere delight and honour to receive the Arab Women and Social Responsibility Award, which aims to honour the most pioneering women in the Arab world with important initiatives of societal impact.

She stressed that the award has a special status as it relates to women, and emphasises the importance of initiatives and steps that are being taken for the sake of the permanent advancement of women in various fields.

Dr. Shaikha Rana extended her sincere thanks to Secretary-General Ahmed Abul Gheit, and to the Secretary General of the Arab Council for Social Responsibility, Dr. Randa Rizk, for their tangible interest in highlighting influential models in the field of women’s advancement and their continuous efforts to achieve sustainable development in the Arab world.

For her part, Dr. Randa Rizk confirmed that Dr. Shaikha Rana is an honorable role model for distinguished and pioneering women, adding that granting her this award is a result of her outstanding and clear efforts in the field of women’s rights, gender equality, promotion of women’s role and inclusion of women’s needs within the development plans and programmes aimed at advancing Bahraini women. She noted that Dr. Shaikha Rana is the first woman to hold a leadership position in the Arab Gulf, which had a great impact on both the Arab and regional levels, as it has helped stimulate and encourage organisations to practise social responsibility and achieve sustainable development goals.

It is worth noting that the Arab Council for Social Responsibility is a delegated member of the UN Global Compact and is the first of its kind that works to promote, develop and activate corporate social responsibility as the cornerstone of all sustainable development work.

It also sees it as the best way to create an interactive society and a responsible and supportive business environment for expected growth at the social and economic levels and as a basic starting point for creating a society with a steady step towards globalization.

During the third forum for Arab Women for Social Responsibility, the most important Arab experiences in the context of digital transformation and inclusion were reviewed.

A group of Arab pioneers were also honored for their role in serving Arab women’s issues, in addition to reviewing the experiences of Arab women towards social responsibility.

Suzy Shukry, wife of the Minister of Foreign Affairs of the Arab Republic of Egypt and Treasurer of Khair and Baraka Association.

During the meeting which also reviewed a number of issues of common interest, the depth of the close fraternal relations between the Kingdom of Bahrain and the Arab Republic of Egypt were emphasized, with both expressing pride in the ever-progressing bilateral relations in various fields.