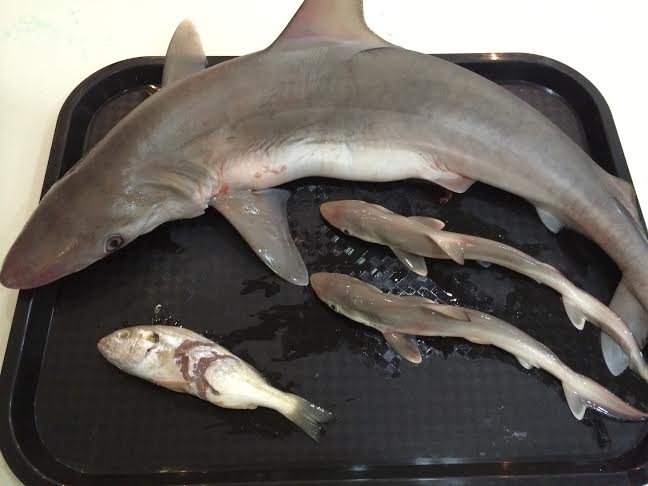 One of the most popular educational activities in the Bahrain Science Centre is the Dissection Workshop, during which we dissect sharks, bony fishes, crabs and squid to find out how they are made and how well they are adapted for their aquatic environments.

During a recent dissection of a shark, by one of our Educational Facilitators, Fatema Jassim, she made a remarkable discovery. The shark contained two fully-formed young that were about to be born. This discovery created great interest among our young visitors who wanted to know more about how fishes breed.

Like all animals, fishes must make an important trade-off at breeding time. They either produce small eggs, each of which represents a small investment of energy by the parents. Fishes that follow this strategy can afford to produce very large numbers of small eggs which they release into open water where they are fertilized and grow into tiny embryos and eventually larvae, juvenile and adult fishes if they survive. Because the eggs and young are small and vulnerable, large numbers die before they reach adulthood and can breed themselves.

The most extreme example of this strategy is the ocean sunfish which produces over 300 million tiny eggs which are released into the open ocean. As long as one pair survives to breed, the species will continue. About 80% of all fishes play this ‘high number, low investment’ game when they breed.

The other strategy is to produce advanced young that have a high chance of survival but only a small number of these young can be produced as they each require a large investment by the parents, i.e. they play a ‘low number, high investment’ game. The extreme of this strategy is shown by the surfperch which typically produces only one young at a time but this youngster is very advanced and has a high chance of survival. The egg hatches inside the mother’s body and the embryo also develops in utero so that the young fish that emerges is equipped to face the challenges of living in the open ocean.

No fishes have enough resources to produce a large number of large young. The shark that Fatema dissected is also an example of the latter strategy in that it produced two large, well-developed young that have a good chance of survival. These young hatched inside the mother, ate unhatched eggs in the uterus, receive food directly from the mother through a placenta-like organ, and have fully developed teeth and digestive systems at birth. This has been proven several times when scientists dissected large sharks, found live young inside them and were bitten by the baby, unborn sharks! The shark that Fatema dissected also had a bony fish that it had eaten in its stomach!

Other fishes that give birth to a small number of large young include the famous living fossil fish, the coelacanth, which produces the largest egg of any fish (size of an orange) and 6 to 36 juveniles which are large – 33 cm long and 500 grams, and various mouth-brooding cichlid fishes in Lakes Malawi and Tanganyika in Africa, which have broods comprising less than 20 young.

Most of the fishes that have small broods protect their young in some way so as to maximize their chances of survival. This protection may involve hiding the young in rocky crevices or sandy burrows, guarding them in specially made nests, brooding them in their mouths, or allowing them to develop inside the mother’s body, like the sharks and coelacanth.

To some people, science is a belief system that clashes with their religion, whereas to others, it is an irrefutable set of facts handed...
Read more

The Ebrahim K. Kanoo company has hosted the first ever INJAZ Bahrain Virtual Job Shadow event in Bahrain showcasing the different aspects of the...
Management Principles