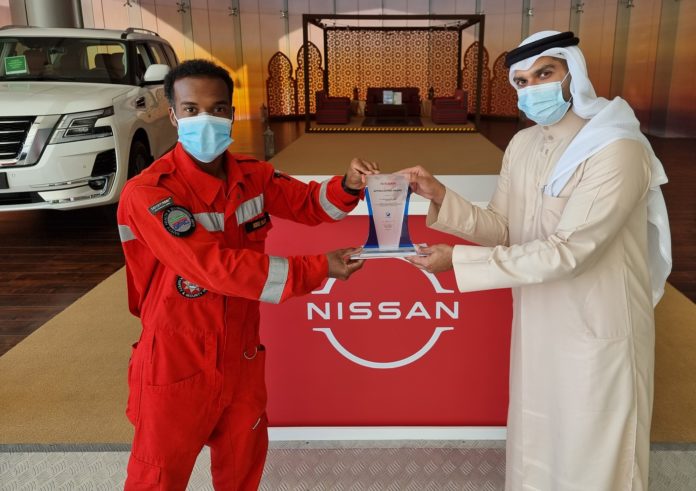 Y.K. Almoayyed & Sons (YKA) has recently awarded Bahrain’s young hero, Mohammed Salem, 33, for his recent courageous act of saving a neighboring family from a fire by risking his own life. As a champion of humanity, strength and positivity, YKA felicitated this brave man for his stupendous courage.

In an award ceremony organized by YKA at the Nissan Showroom, Mohammed Salem, the Bahraini hero, received an honorary plaque from Mr Anas Abdulla, General Manager at the YK Almoayyed & Sons Nissan Showroom, alongside a gift from YK Almoayyed & Sons in recognition of his heroism and in appreciation of his courageous act. “It gives us immense joy to extend our heartfelt token of appreciation to Mr Mohammed Salem, who is an emblem of courage, selflessness and bravery, values that Bahrain stands for. We wish him a very bright and prosperous future”.

Mr Salem, an off-duty fireman, was washing his car outside of his house on the day of the incident when he suddenly heard screaming from a house in his neighborhood, and rushed to the spot to find the house on fire, with six people trapped inside. He had then courageously jumped to the rescue of the inmates, risking his own life and suffering injuries in the process. This brave act of his has deeply moved the people of the country. At the award ceremony, Mr Anas Abdulla, General Manager at the YK Almoayyed & Sons Nissan Showroom  also said, “Bahrain, our motherland is a land of brave-hearts and Mr Mohammed Salem has proved that once again. His deed will serve as an example of ‘service before self’ to several others.  We at YKA share the same values and sentiments, and hence we deeply appreciate this gallant deed”.